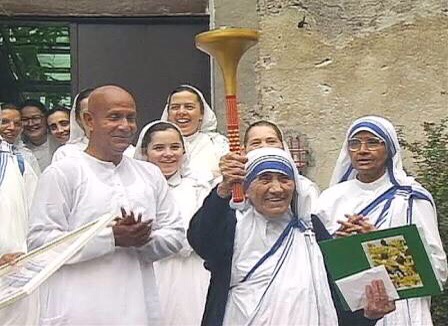 Miracles. Do they still happen? What’s the difference between a miracle, and a *miracle*? As Jamal Wallace said in Finding Forrester (2000), ‘not exactly a soup question now, is it?’ But before we get bogged down in too much semantics, allow me to tell you what’s NOT a miracle. Jologs was a Filipino movie that aimed to capture the spirit of early naughties Pinoy youth. The film featured an ensemble cast with some notables including Patrick Garcia, Deither Ocampo, Assunta de Rossi etc. Jodie Santa Maria, then an up and coming actress, played a character searching for a sign. She was on the bus when this hit suicidal Vhong Navarro. While Vhong escaped without a scratch, unwitting Jodie takes this as the sign to get together with Patrick. Convinced that this was the right time, she later realises that this was a big mistake. Sometimes seeing is not tantamount to believing. Everyone whispering of ‘miracles’ does not beget a bona fide miracle.

Which brings us to the Vatican. News of the church’s newest Saint has been well documented. Sweeping shots have revealed crowds gathering in Saint Peter’s square for the canonisation of Saint Teresa of Calcutta. The required two miracles having been met, Pope Francis made it official last Saturday morning in Rome. There had been extensive coverage on Mother Theresa two weeks ago, with CNN providing an insider look through their Indian correspondent. ‘She looks a bit like my former supervisor,’ I said to no one in particular. Indeed the pretty reporter was simple but smart, just like my mentor. Having met Mother Theresa in person, and having lived in Calcutta, she was a first hand witness to the new saint’s altruism. She even got to interview the woman behind Mother Theresa’s beatification in 2002. The Indian woman was supposedly cured of cancer after placing a locket of the Saint onto her stomach. She argues that her constant prayers to Mother Theresa was behind her remission. In the aftermath of the miracle, she converted and became Catholic. The CNN report showed how her new found faith was infectious. 10 families in her neighbourhood decided to become Catholics as well, with a small church erected in St Teresa’s name.

Living in a convenient time

Mother Teresa’s piety and selflessness was obvious. After all, the Albanian born nun founded the Missionaries of Charity and made Calcutta her headquarters for almost 50 years. Her critics could not believe that the diminutive figure had her sainthood expedited. There should be no exceptions, they argue, even for a modern day heroine. They likewise point to Mother Teresa’s ‘faults’, with the same dogged affection for the poor also being her shortcoming. While she thrived in helping India’s slum dwellers, some have claimed that she didn’t do enough to ease others’ suffering. In other words, people were faced with the same conditions when she left. She also was against painkillers, and contraception, despite the impact of overpopulation being all around her.

Why is her canonisation the right move? Let us count the ways. Some have argued that her relationship with the poor, while living in a media-dominated time, have paved the way for her sainthood. Her work was closely followed, and the Holy See was in rapt attention. Therefore, Mother Teresa’s sainthood is as much a sign of the times. Living the John Paul II era, she fit a certain description of an ideal Catholic, someone who wouldn’t think twice before parting with their last Fita cracker. Moreover, miracles of the 19th century may not be considered as such today, and vice versa. Speaking of miracles, there is one thing I need to get off my chest. While I appreciate the wit, I am not a fan of posting ‘trainee Saint’ as one’s occupation on social media. I get that this is all in good faith, but I guess I’m a traditionalist, this doesn’t look right, and will never catch on. Saint Mary McKillop, Saint Lorenzo Ruiz, but there’s no such thing as ‘Marty’, Saint in waiting.

At a deeper level, one’s faith and relevant actions deserve to be celebrated, as they are miracles as well. Having faith in Gott is something that goes beyond reason. As something that cannot be explained, that endures to have a place in this century, this is nothing short of a miracle. The same goes in reaching out to the poor, and giving without expecting return. Curing cancer is not only about images and defying logic; transcending science through faith deserves as much press. Sadly we live in a time of lesser prayer, more work and even more play. I would suggest that Mother Teresa’s canonisation is the reminder we need that there’s a place for prayer, faith and miracles in our time.