WE FINISHED FEB with a flourish. After seeing The Mule and Green Book (which shockingly won Best Picture), we caught Alita: Battle Angel at the cinemas this past week. Alita is, no question, the month’s biggest release. Based on the popular manga, pundits hailed the stunning special effects, the formidable cast, and the live-wire action. Meanwhile, doubters have claimed that the story was constipated when juxtaposed with the otherworldly visuals. Movie fans also made a big deal of the first collaboration between producer James Cameron and Robert Rodriguez. Moreover, as my buddy pointed out, this was Cameron’s first film since Avatar (2009).

One thing I can tell you: this film was full-on. Alita (played admirably by Rosa Salazar) is an ancient cyborg with eyes as big as saucers. She subsists in a human wasteland of the future. The concept reminded me of Elysium (2013), as this picture likewise had a dream place (named Zalem). Dr Ido (Christopher Waltz) rescues her from the dump and manages to bring her back to life. Nourished and loved, Alita seeks more. She openly defies her mentor and does not come home before dark. She finds friendship and romance but likewise realises her peers’ desperate hopes of one day stepping foot in Zalem. She plays Motorball, that perilous game of speed and wits, winning over friends. In no time, she soaks in the sport and becomes the best player on the pitch.

My pal commented that Alita keeps getting herself into sticky situations, and that this wouldn’t be the case in real life. I couldn’t agree more. This sets the stage for blazing action sequences, but is that enough to woo audiences? The answer is yes and no. The film, with a $175M budget, grossed only $65 million at the US box office. Audiences clearly did not warm up to the show. However, the worldwide cumulative more than made up for it, as it has eclipsed $200M in overseas markets. The film received mixed reviews from critics, currently holding a 60% Fresh rating on Rotten Tomatoes. Battle Angel also has some lighter moments, and one particular scene set me off.

Mahershala Ali was underwhelming as the villain Vector. He was the guy pulling the strings at Motorball combat matches. Jennifer Connelly was better as Dr Ido’s ex-wife. What I liked about the movie was how characters changed in the end. Call the movie convoluted, haphazard, all over the place, but you can’t fault Rodriguez for transforming the players. As per above, lacking in action is one thing you can’t surmise about this one. There are fight scenes, Motorball sets, and more fight scenes. At some point, there is even an Edward Norton sighting. My friend was a bit taken aback after appraising the cameo. 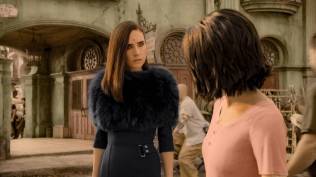 We can deduce that Alita is about getting second chances. Believe it or not: even the cheapest lowlifes can be reformed. In addition, when Alita loses her armour, another takes it place. When Dr Ido loses his daughter, he finds a remnant and christens her, Alita. Like many, I did not appreciate the whitewashing. The story, while told in a distant tomorrow, was meant to have Japanese characters. To appeal to wider demographics, Cameron and Rodriguez went off script and called in Hollywood’s big guns. Judging by the box office results, the audience didn’t buy this charade. Enjoyable, yes, but lacking originality and inclusion. Some fans have even deemed Alita as ‘the best manga adaptation’; while having its merits, I beg to differ.